Japan’s Science Teams are Cracking the Code of Sleep Mechanisms

BOSTON — Many celebrated CEOs claim to need little sleep, often boasting of it as a proof of their drive for success.

In reality, however, the urge to sleep, or a lack of thereof, has nothing to do with one’s grit. It rather is determined by the chemical reactions in your brain involving a specific group of proteins, according to Prof. Masashi Yanagisawa of the University of Tsukuba in Japan. Moreover, how many hours you stay asleep is directly controlled by the amount of calcium flowing in and out of neuron cells in the brain, University of Tokyo professor Hiroki Ueda told some 159 science researchers who descended on Harvard University’s campus on Nov. 10 for the 3rd annual Japan-U.S. Science Forum in Boston.

Sleep deprivation is a serious societal problem, said Harvard University professor Takao Hensch, who moderated the forum. The race to decode the science behind sleep is heating up, and some major breakthroughs are coming out of Japan, thanks to collaborations among such prominent neuroscientists as Drs. Yanagisawa and Ueda and their counterparts in the U.S. and elsewhere.

“It’s so important, especially these days, to build bridges (among different people and cultures),” Prof. Hensch said. “And what a better language to have than science, which is so universal,” he said, stressing the roles the forum plays in fostering a global society.

For the third year in a row, the Science Forum brought the American and Japanese science communities together in Boston. Focusing on the topic of “the science of sleep,” this year’s event featured keynote lectures by two of the biggest names in the field: Yanagisawa, director and professor at the International Institute for Integrative Sleep Medicine (IIIS), the University of Tsukuba, who discovered a wake-promoting neuropeptide called orexin: and Ueda, professor for the International Research Center for Neurointelligence (IRCN), who is known for his studies on circadian clocks.

In addition, a panel of four human and social science experts discussed the connections among sleep, emotional and physical health, education and cultures. Participants also had the chance to learn about the 25 cutting-edge projects presented at the poster session.

Jointly organized by the Japan Society for the Promotion of Science (JSPS)’s Washington Office, the Consulate General of Japan in Boston, and the United Japanese Researchers Around the World (UJA), the forum began in 2016 as a way to showcase Japan’s scientific undertakings and promote global partnerships. Boston, a premier hub for science and innovation, is a fitting backdrop for the forum, Dr. Kohji Hirata, director of the JSPS Washington Office, said.

In his opening remarks, Dr. Mark Elliott, vice provost of Harvard University, vowed to further strengthen the relationships that the university has forged with Japanese institutions since the late 19th Century. He also expressed his concerns about the potential negative effect that U.S. immigration policies could have on science.

“American science is not limited to what happens within our borders,” Dr. Elliott said.

Researchers have known that sleep is regulated by two major processes — the homeostasis and circadian processes — working simultaneously: The former causes sleep need to accumulate over the course of a day, and the latter regulates the timing of sleep. Emotional arousal can also serve as a temporary sleep control.

“But, actually how the processes are implemented in the brain is not known,” let alone why all mammals must sleep, Dr. Yanagisawa said.

He explained that as sleep pressure increases and decreases, the sleep circuitry and the wake circuitry play a seesaw game, as if a switch is turned on and off.

“If there is a switch in the brain, what is the finger that presses the switch?” Dr. Yanagisawa asked.

Dr. Yanagisawa’s pursuit of an answer led him to introduce random genetic mutations in 8,000 mice and screen them for sleep abnormality due to genetic defects. It revealed all of the mice that exhibited an excessive need for sleep carried a mutant gene for a kinase called SIK3. Because the mutation causes SIK3 to more actively catalyze the phosphorylation of other proteins, Dr. Yanagisawa’s team scanned the brains of the sleepy mutant mice as well as sleep-deprived normal mice with the use of EEG to see which proteins were hyper-phosphorylated. The resulting 80 proteins make up the list the team named the “Sleep-Need-Index-Phosphoproteins (SNIPPs).”

“Similar kinase pathways are activated both in the sleepy and sleep-deprived mice’s brains,” indicating SIK3 plays roles in pressing the “switch,” Dr. Yanagisawa said. This also suggests there is a between sleep and synaptic plasticity, which affects cognitive activities.

On the premise that “the phosphorylation/dephosphorylation cycle of SNIPPs underlies both synaptic homeostasis and sleep homeostasis,” Dr. Yanagisawa’s team is continuing with the research.

The amount of sleep people need changes over their lifetime. Babies sleep the most, and seniors require fewer hours of shuteye.

But, how does the brain know when to fall asleep and when to wake up?

As a first step toward finding an answer, Dr. Ueda and his team at the University of Tokyo and RIKEN created the “Averaged-neuron model” (AN model) to simplify neuron network models for faster computational analysis of synaptic interactions. Based on the model, they predicted that sleep duration is regulated by calcium ions, and compiled a list of 29 genes that could potentially affect the flow of calcium ions in and out of neuron cells. They then made 21 different types of triple-knockout mice to test their theories. This revealed seven of these genes substantially changed sleep duration. The experiment also confirmed that calcium ions must flow into neuron cells for mice to fall asleep and that calcium ions must be pumped out of neurons for mice to wake up, according to Dr. Ueda.

In other words, Ca2+-dependent hyperpolarization pathways, through which the levels of calcium ions — and the electrical charge — inside neuron cells are controlled, underlies the regulation of sleep duration in mammals.

More recently, the team found that mice that are missing genes Chrm1 and Chrm3 do not show any sign of REM (rapid eye movement) sleep even when sleep-deprived.

Because anesthetic and hibernating states are biochemically similar to that of sleep, his findings left Dr. Ueda with a new question about calcium level fluctuations in neurons.

“What is the point of no return?” he asked, referring to death.

Dr. Ueda’s discoveries were a testament to his and his team’s ingenuity. They not only built the AN model but also used the next-generation CRISPR (Clustered Regularly Interspaced Short Palindromic Repeats) method to efficiently edit mice genes, so they could create triple-knockout mice without cross-breeding. In addition, they invented a mice-holding chamber that records their respiration to measure their brain activities. This spares mice from an invasive surgery to bolt down a metal disc to their brains.

Dr. Ueda hopes the research will help find effective treatments for debilitating psychiatric and neurodegenerative diseases, including schizophrenia, depression and Parkinson’s disease, which are all associated with sleep disorders.

This year’s forum began with presenters collectively offering the words of caution on sleep deprivation, and its profoundly adverse effects on one’s brain functions and overall health. Japan, which is said to be the most sleep-deprived country in the world, loses as much as 2.92 percent of its GDP, or 138 billion dollars annually, to non-productivity due to lack of sleep, Dr. Yanagisawa said, citing RAND Corporations’ sleep study from 2016.

During the panel discussion titled “Sleep and Society,” the four panelists examined various implications of sleep deprivation that go far beyond economic losses.

Dr. Rebecca Spencer, associate professor of psychological and brain science at the University of Massachusetts, Amherst, said she and her research team found that naps, if taken along with an adequate night’s sleep, help young children aged between 3 and 5 maintain memory. Naps, which are non-REM sleep, also enable children to better process emotions and promote emotional stability, so long as REM sleep also occurs during the 24-hour cycle.

Mr. Raymond So, undergraduate student at Harvard University, talked about “Sleep 101,” the university’s mandatory online course for incoming freshmen that he spearheaded to raise awareness about the importance of sleep. Calling caffeine a “widely used drug on campus,” Mr. So said students need to understand sleep is a hygiene activity essential to academic success and a quality college life.

Dr. Sara Lazar, assistant professor of psychology at Harvard Medical School, also explained her findings that meditation increases “gray matter” in some parts of the brain, including those that deal with memory, empathy and self-awareness, while reducing gray matter in the part that responds to stress. Mindfulness reduces the activity of the default mode network (DMN) but increases its connectivity. Therefore, mindful training improves neuronal plasticity, keeping the brain younger and making emotional regulation easier, she said.

Dr. Merry White, professor at Boston University’s anthropology department who has lived in Japan, discussed how the Japanese’s propensity for staying up late has grown over the past half century, becoming a nation famous for people’s “instant sleeping” on the train and in other public places.  At workplaces, “Being present may be more important than being awake,” Dr. White said, in an agreement with similar comments by Dr. Yanagisawa and others.

The poster session drew a wide array of research projects from neuroscience to psychology to oncology. The presenters included current and past fellows of the JSPS, which is Japan’s largest public funding agency for academic activities. Many poster presenters echoed the event-goers’ sentiment that the Science Forum provided invaluable networking opportunities.

Ms. Qianyi Chen from the University of Pittsburgh, who showed her work on sleep and mental disorder, said the forum attendees were diverse in nationality, as well, and that she enjoyed learning about similarities and differences among their research approaches.

“I think the forum gave us a lot to talk about because sleep is a topic of interest to so many,” said Mr. Wataru Katagiri, who works on a laser immunology research project at Massachusetts General Hospital. He said the poster session that covered many different subject matters was enjoyable and that from it he also gained a better understanding about the JSPS.

Various companies also exhibited their products and informational literature during the poster session. 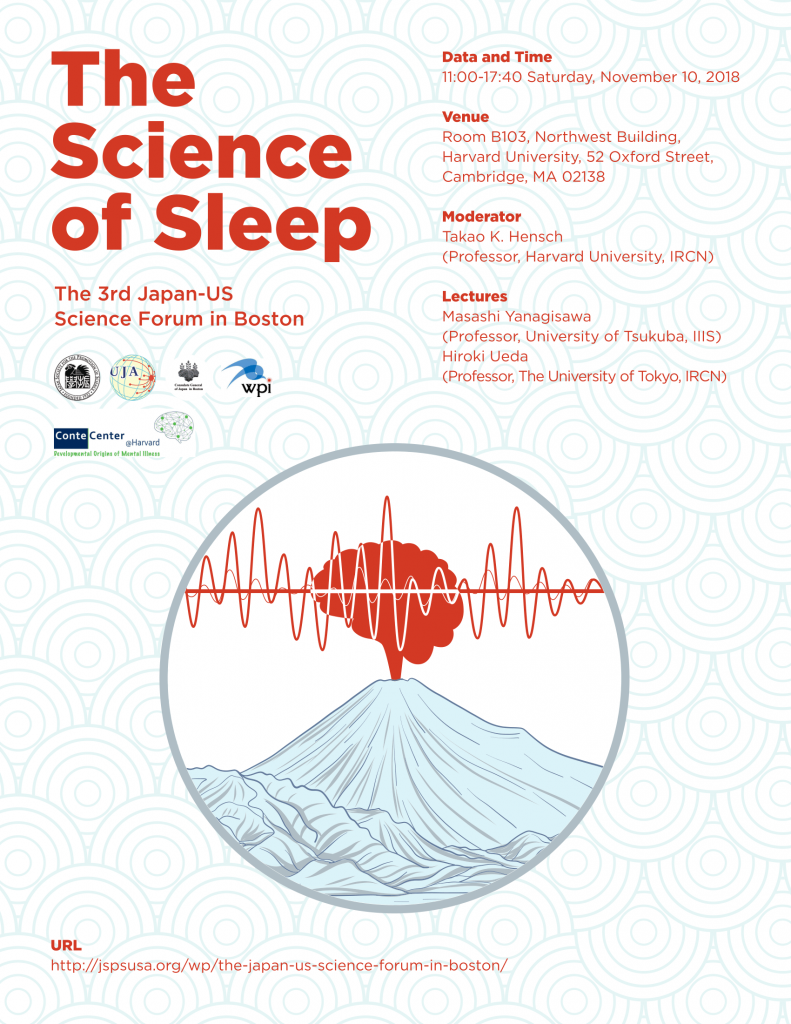 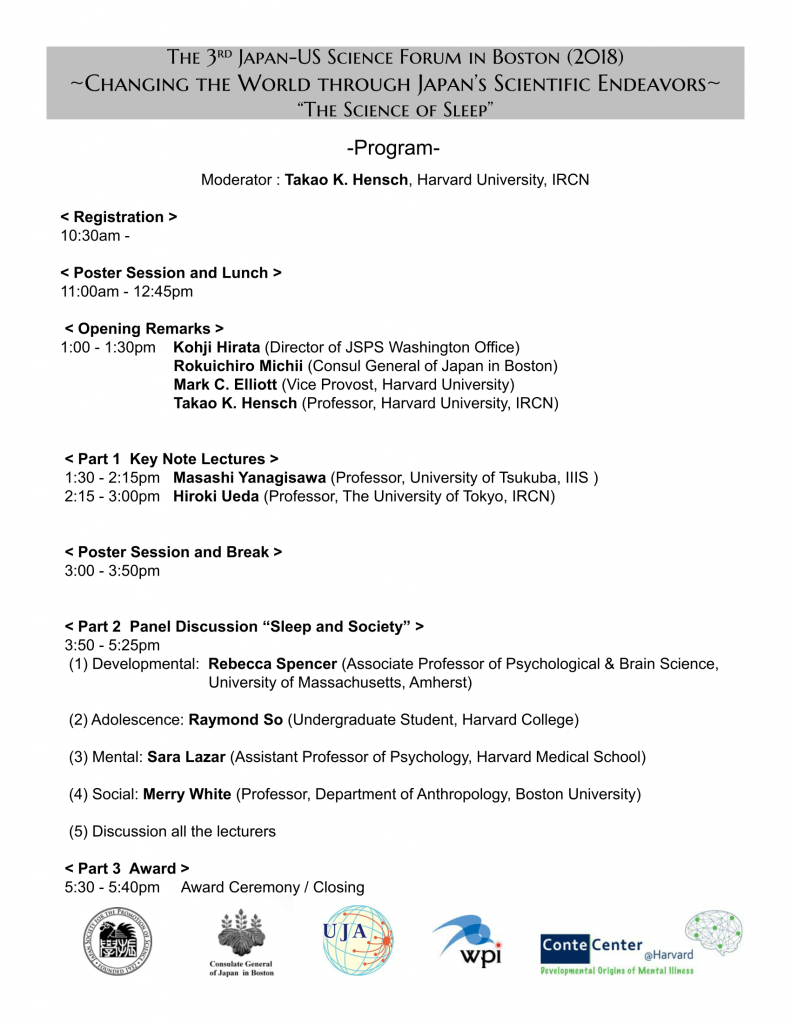