On March 9, 2018, the JSPS Washington Office, together with the Fogarty International Center (FIC) of the National Institutes of Health (NIH), held the 2018 JSPS-NIH Forum. The forum took place in the historic Mary Woodard Lasker building at NIH’s main campus in Bethesda, Maryland, just north of Washington, D.C.
The forum, which is held annually, features special lectures from invited guest speakers on a range of topics in biomedical research, as well as presentations from former and current JSPS-NIH Fellows. The JSPS Research Fellowship for Japanese Biomedical and Behavioral Researchers at NIH (JSPS-NIH Fellowship or “Kaitoku-NIH”) provides young postdoctoral researchers from Japan with an opportunity to undertake research projects alongside highly accomplished scientists at NIH, one of the most prestigious public research facilities in the world, and to prepare for future academic or public research careers.

This year’s invited speakers were Dr. Noriyuki Tsumaki of Kyoto University, who presented his research on the therapeutic applications of iPS cell technologies, and Dr. Mizuki Azuma of the University of Kansas, who gave a lecture on her work with Ewing Sarcoma Proteins. Both Dr. Tsumaki and Dr. Azuma were JSPS-NIH Fellows early in their careers.

The forum’s opening remarks were provided by Dr. Kohji Hirata, the director of JSPS’s Washington office; Mr. Daisuke Baba, the First Secretary of the Science Section of the Embassy of Japan; and Dr. Yoh-suke Mukouyama, the chair of the JSPS-NIH Fellowship Review Panel and a Senior Investigator in NIH’s National Heart, Lung, and Blood Institute (NHLBI). Each speaker expressed their gratitude for the depth and closeness of the ongoing relationship between JSPS and NIH, and shared their hopes for advancing scientific achievements with the current and incoming JSPS-NIH Fellows. 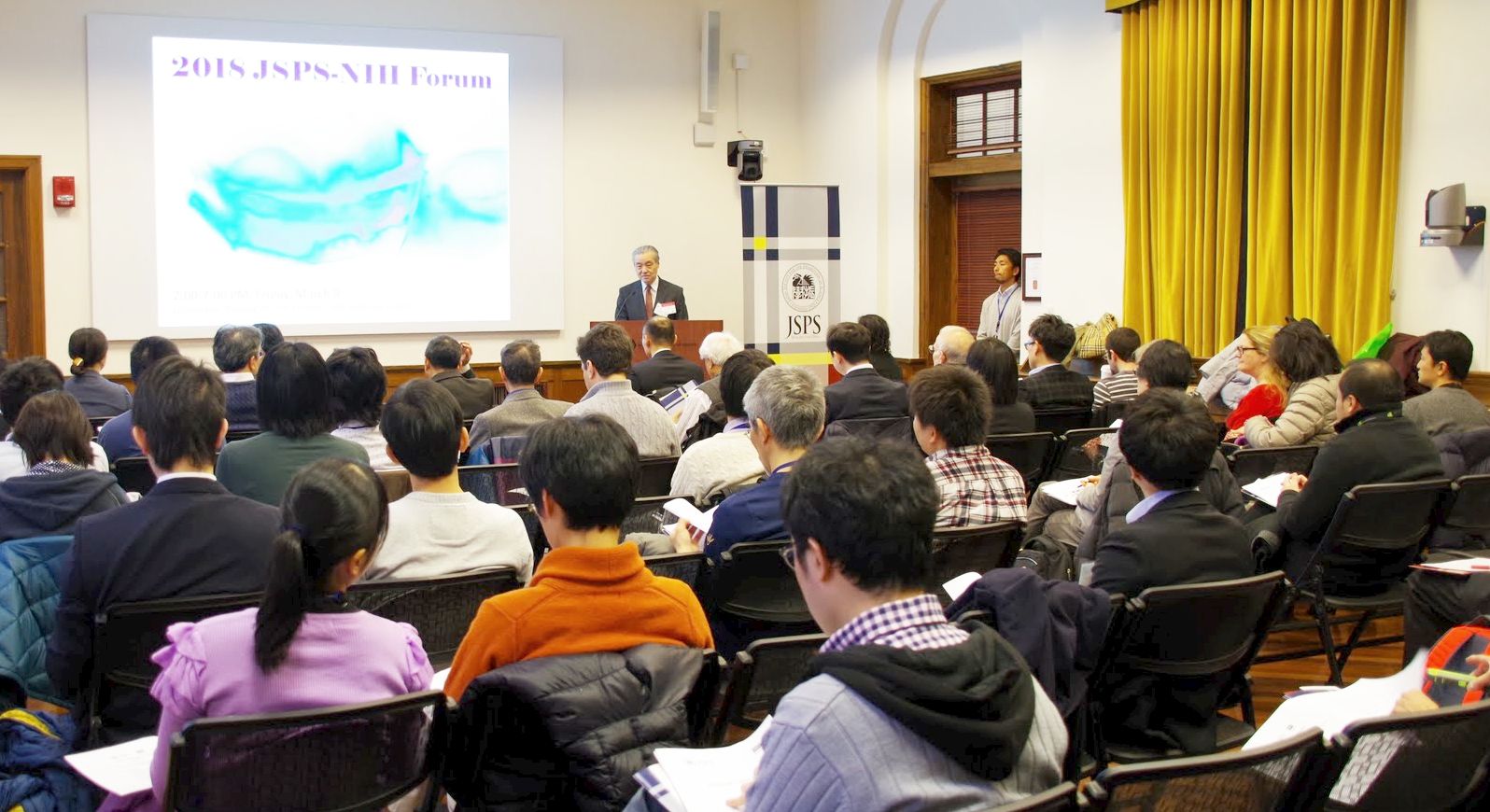 ■ Alumni Keynote Lecture #1: Dr. Noriyuki Tsumaki
Dr. Tsumaki’s presentation explained his current research into treatments for cartilage diseases using technologies derived from iPS cells. Dr. Tsumaki’s research focuses on therapeutic applications of iPS cells as treatments for diseases caused by abnormalities in cartilage. When cartilage cells are in their growth phase early in life, abnormalities can cause systemic bone diseases, such as chondrodysplasia; when they are fully grown and have formed articular cartilage, abnormalities can cause diseases such as osteoarthritis, which causes pain in the joints. Cartilage diseases are difficult to treat because unlike other tissues in the body, cartilage has limited self-repairing capabilities. This has long frustrated surgeons, who struggle to repair or replace damaged cartilage tissue in patients. Some current treatments use donated cells from young children, whose cartilage is still growing; however, this is an imperfect treatment as there is a scarcity of donors and the cartilage derived varies depending on the donor source.

Dr. Tsumaki’s lab has been creating iPS cells from human dermal fibroblasts using Yamanaka reprogramming factors (c-MYC, KLF4, SOX2, and OCT3/4). His ongoing research has been focused on differentiating these iPS cells so that they become chondrocytes, or the cells that make up healthy cartilage. Having successfully developed a method to do so, the iPS cell-derived cartilage created by Dr. Tsumaki’s lab has shown promising cartilage growth after subcutaneous implantation in early experiments with mice. Dr. Tsumaki’s lab plans to eventually use iPS cell-derived cartilage to treat patients with articular cartilage damage. 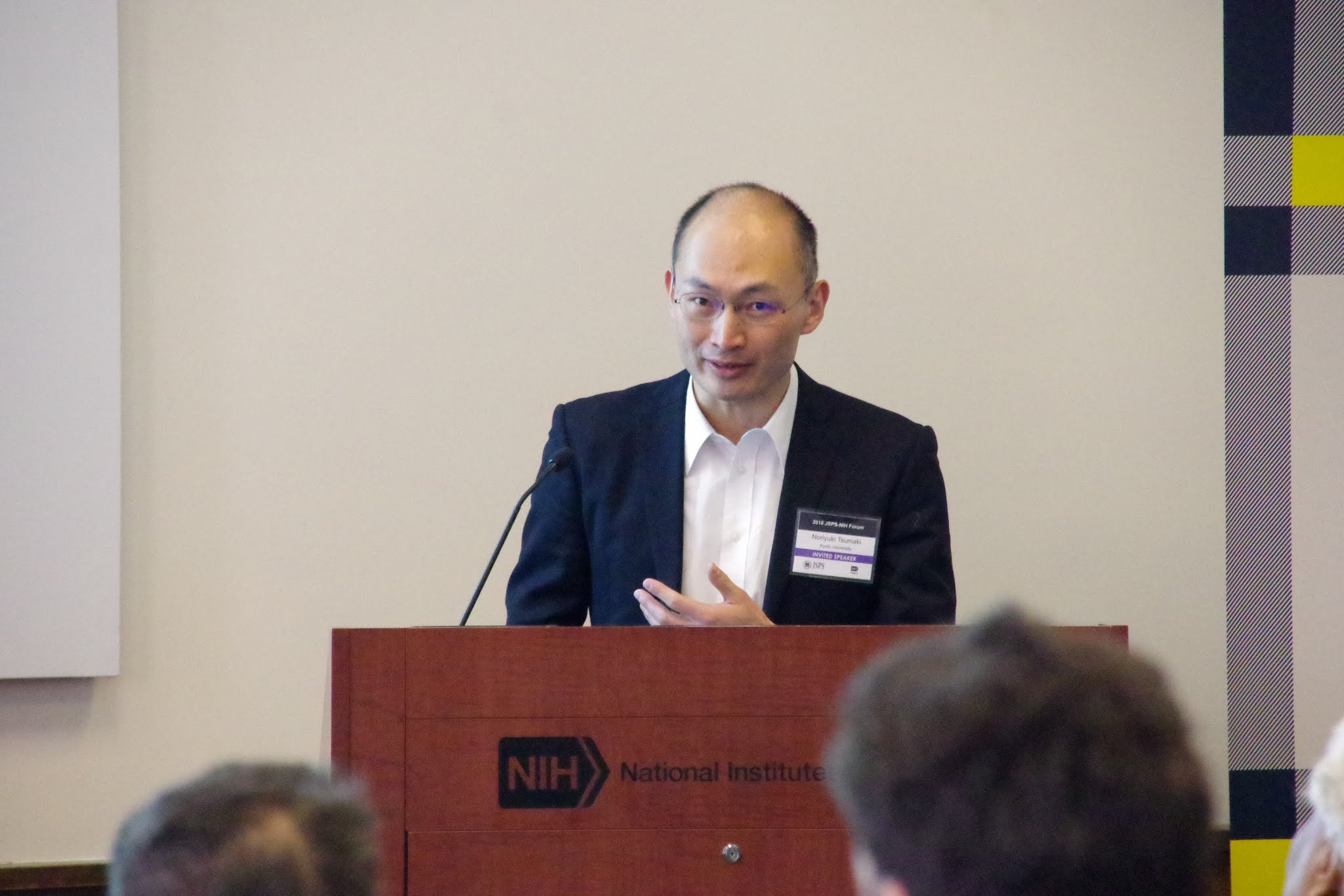 ■ Alumni Keynote Lecture #2: Dr. Mizuki Azuma
Following Dr. Tsumaki’s presentation was Dr. Azuma, who spoke about her work investigating the gene EWSR1 (Ewing sarcoma breakpoint region 1), which is encoded in on human chromosome 22. Mutations in the EWS gene are known to cause cancers from the Ewing family of tumors, which includes Ewing’s sarcoma, a cancer that affects bones and soft tissue. Ewing’s sarcoma is the second-most common skeletal cancer in adolescents. Dr. Azuma’s research has been focused on understanding exactly how mutations in the gene cause tumorigenesis, or tumor growth.

In Dr. Azuma’s work, her lab has examined possible tumorigenesis causes such as allele loss, which was shown to promote chromosomal instability and tumorigenesis; the presence of the tp53 mutation, which is found in 10% of Ewing’s sarcoma patients and caused a high incidence of tumorigenesis in the zebrafish; and the role of the protein ewsa, which plays a role in regulating the creation of cartilage during the zebrafish’s development. Dr. Azuma’s lab plans to continue using the knowledge gained about EWS during this study to dissect the molecular basis of EWS-Aurora B pathways. Aurora B kinase, whose interactions with EWS have been explored in previous papers co-authored by Dr. Azuma, is a protein that plays a role in mitosis, and its overexpression has been linked to cancers. Her lab will accomplish this by continuing its work with zebrafish, with plans to establish a transgenic line of fish expressing EWS-R565, which plays a crucial role in the interactions between EWS and Aurora B kinase. 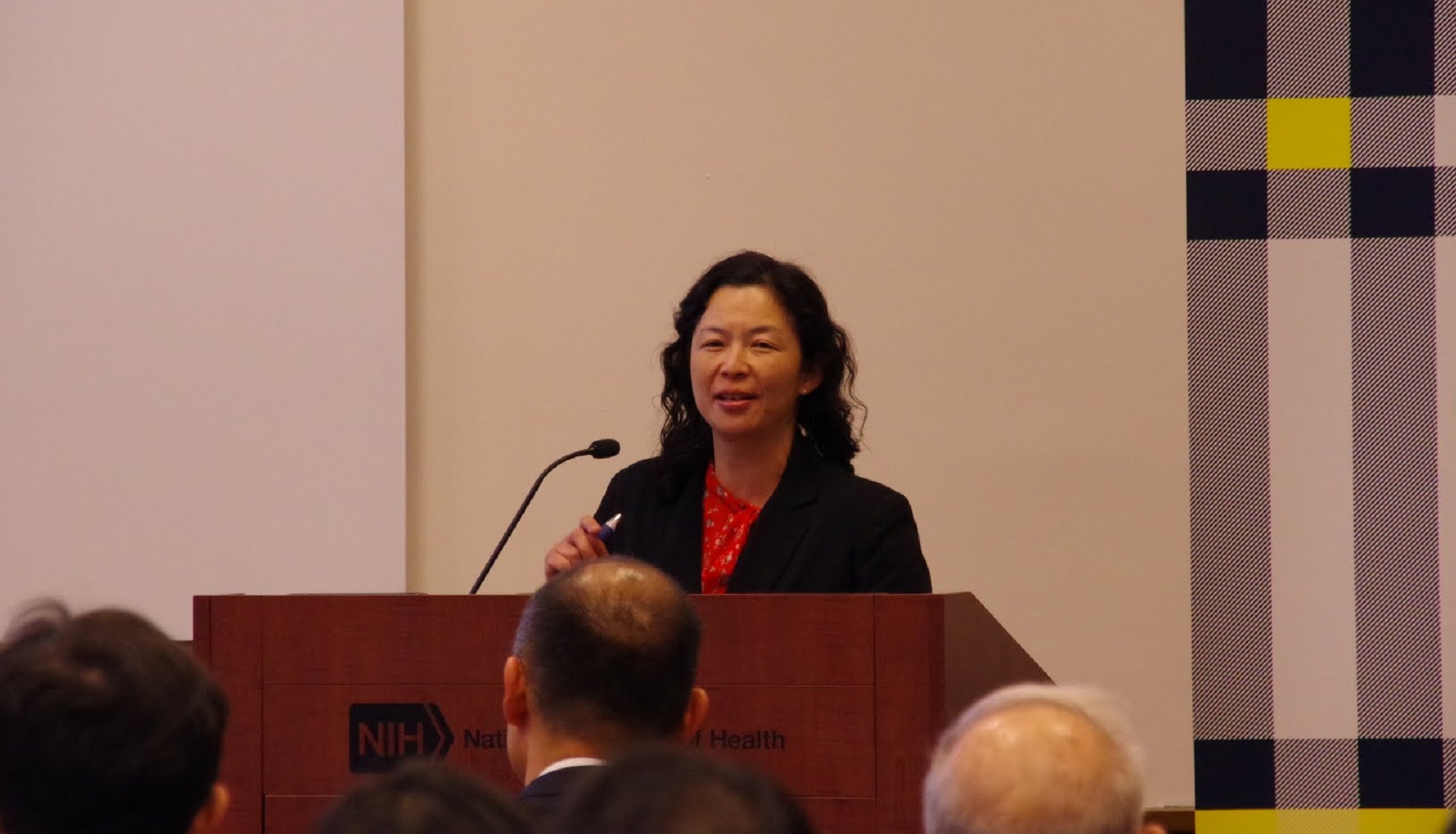 ■ Presentations by Recent JSPS-NIH Fellows
Dr. Tsumaki and Dr. Azuma’s presentations were followed by presentations from two former JSPS-NIH Fellows who just finished their fellowships, Dr. Takeshi Kawabe and Dr. Tetsuro Kobayashi, as well as Dr. Risa Isonaka who is in the second year of her fellowship. Dr. Kawabe, who now remains at NIH, presented on his research regarding CD4+ T cells, a type of T cell that helps the activity of other immune cells by releasing small proteins known as cytokines to assist them. Dr. Kawabe’s work is focused on investigating CD4+ T cells’ role in cultivating innate immunity, the part of the human immune system that provides immediate defense against infections and activates the immune system’s more complex adaptive components, which are the features that provide humans with extended protection from previously encountered pathogens.

Dr. Kobayashi, also a former fellow who remains at NIH, presented next, sharing his work on lymphoid cells in the skin (innate lymphoid cells, or ILCs) and their role in regulating the oil-producing sebaceous glands and maintaining the health of the community of microbes that live on the human body, making an intriguing and persuasive argument for the role of skin-resident ILCs as key players in regulating microbial commensalism. Dr. Isonaka rounded out the presentations with her work on identifying the key role of the deposition of the protein Alpha-synuclein in sympathetic neurons, the cells that activate the body’s unconscious actions, as a cause of Lewy Body diseases. Lewy Body diseases are a group of degenerative illnesses that impact the central nervous system, including Parkinson’s disease. The mechanisms of Lewy body diseases are currently poorly understood, so Dr. Isonaka’s work represents an important development in treatment of this family of illnesses. 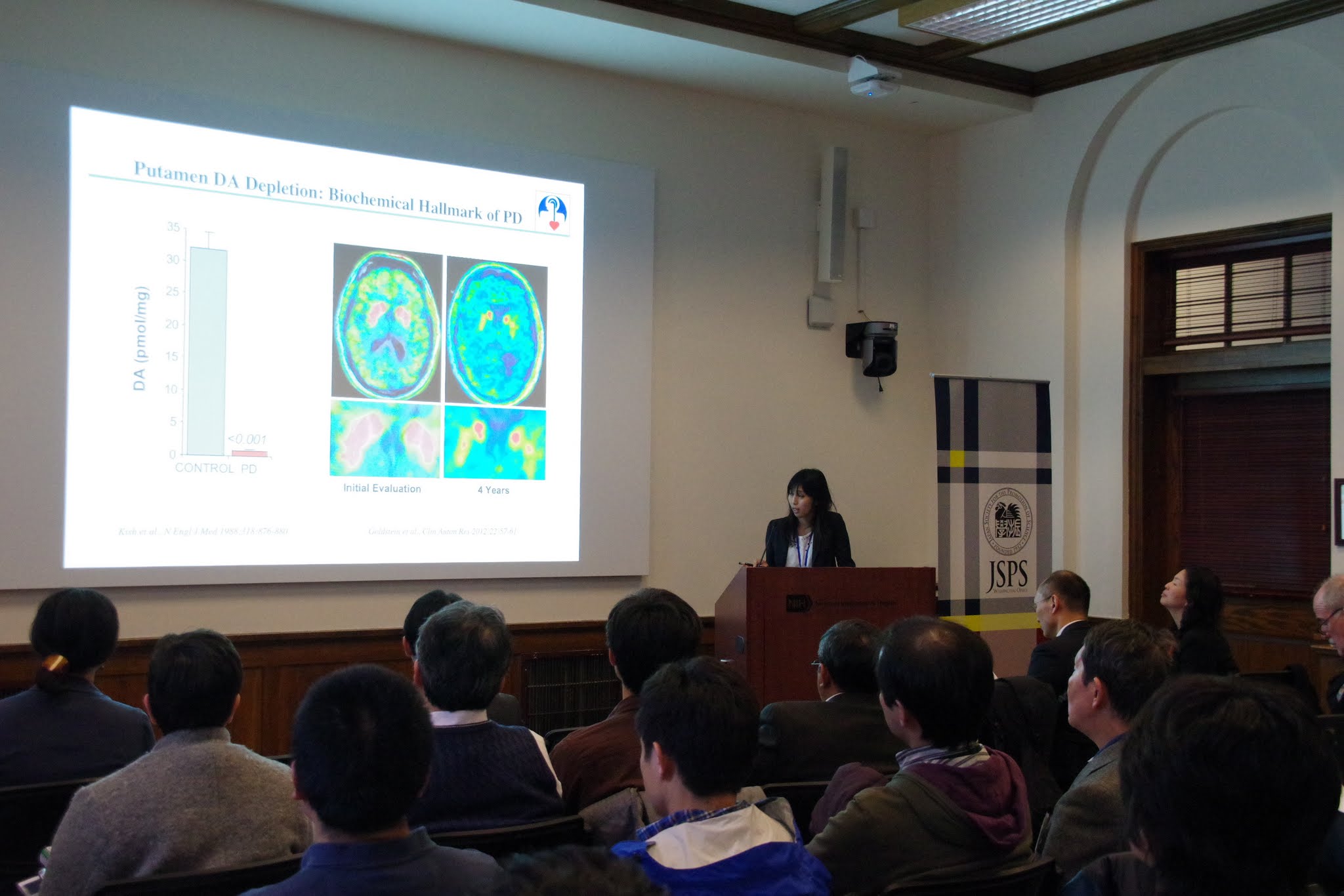 ■ Introductions to the Current Class of JSPS-NIH Fellows
Finally, each member of the incoming class of JSPS-NIH Fellows gave a “Flash Talk,” where they had three minutes to introduce themselves, their background, and the research they would be conducting during their time at NIH. Both the audience and the former fellows seemed to enjoy this opportunity to meet the newest group of researchers, and the fellows succeeded admirably in the difficult task of boiling their work down to just a few moments’ explanation, crafting succinct yet detailed and interesting summaries of their research.

The event attracted a full-capacity audience, drawing members of the local Japanese research community, NIH researchers and staff, writers for scientific publications, and many other interested individuals. The audience could be seen paying close attention to every presentation, and audience members engaged regularly with speakers during several lively Q&A sessions. 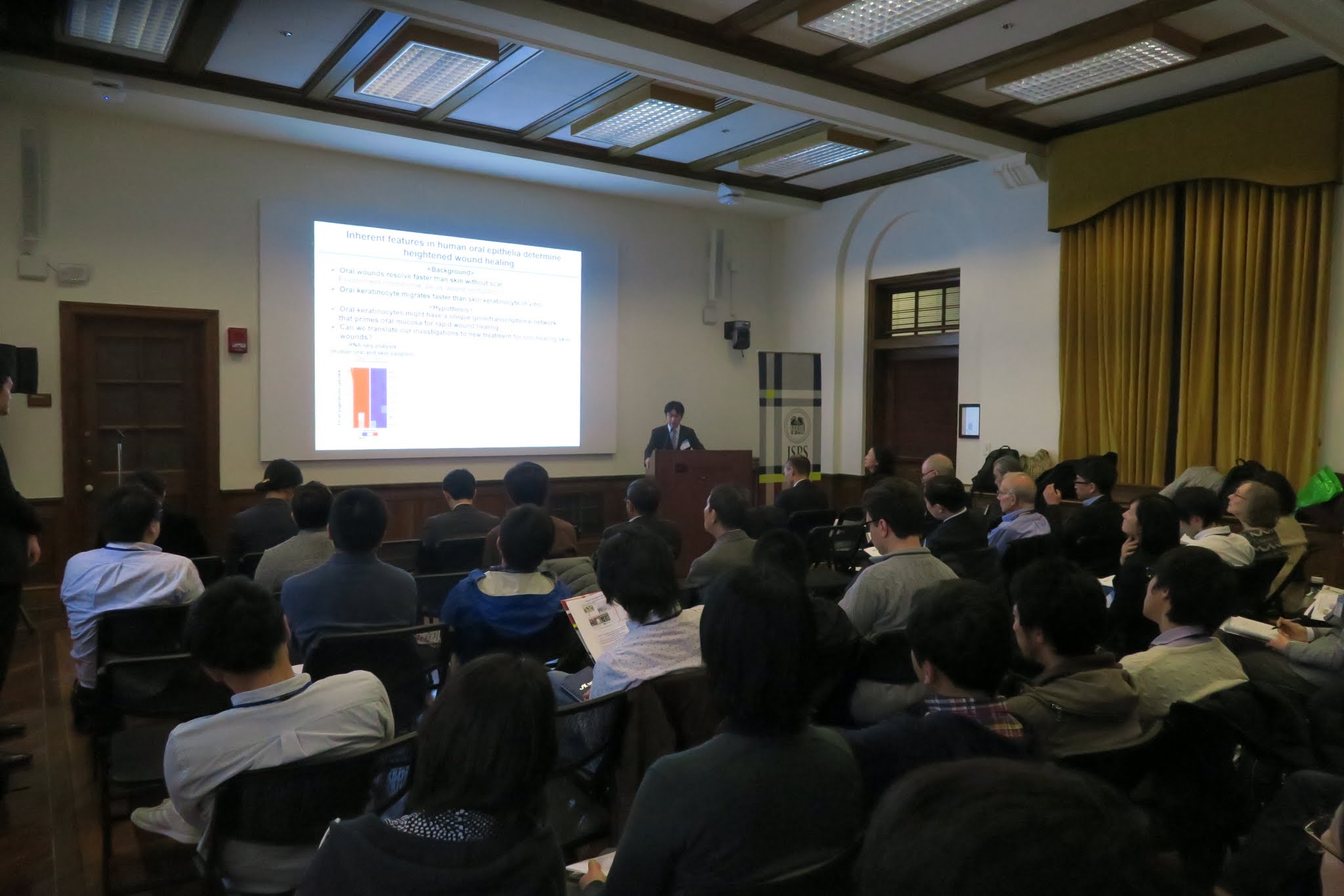 ■ The Reception: Celebrating the Talented Young Fellows and the JSPS-NIH Partnership
After the forum, a reception offered guests and speakers alike the chance to relax and mingle, which took place in the beautiful wood-paneled setting of the Lasker Building’s former chapel. Dr. Peter Kilmarx, the Deputy Director of the FIC, and Dr. Michael Gottesman, the Deputy Director for Intramural Research at NIH, gave heartfelt remarks as they provided the welcoming speech and the toast, respectively. Dr. Kilmarx expressed his gratitude for the opportunity to have supported talented Japanese scientists and strengthened the bilateral biomedical research relationship between Japan and the US, which stretches back to the fellowship program’s origin over twenty years ago. Afterward, Dr. Gottesman asked everyone to raise a glass to the “all of the people – the Japanese and the Americans – who have supported this program over the years,” honoring the contributions not only of “these incredibly talented Japanese scientists,” but also of their mentors and co-researchers, the JSPS staff, and the JSPS-NIH Fellowship review committee.

After the toast, the reception crowd – a lively mix of guests, NIH and JSPS staff, and current and former fellows – thoroughly enjoyed the opportunity to reconnect with old colleagues, seek advice from experienced researchers in their fields, and make new acquaintances among the members of the Washington, D.C. biomedical research community. Several former and current JSPS-NIH Fellows could be seen greeting their younger counterparts from the entering class, and the new fellows also spent much time getting to know each other. Lines quickly formed around the forum’s invited guest speakers, Dr. Tsumaki and Dr. Azuma, who generously fielded questions and provided advice to the fellows and interested guests.

Asked about their impressions from the day, the incoming fellows were unanimous in their positive assessment. Dr. Junya Wada, who is beginning his fellowship with the National Cancer Institute, where he will research in vitro reconstitution of T-cell signaling, said, “As a postdoc, the presentations here are very good training. Presenting your work is a crucial skill if you want to be a PI, or even to work in a private company. Trying to do it in three minutes is so difficult, but it made me think hard about my research.” Dr. Shino Shimada, who will work with National Human Genome Research Institute (NHGRI), observed, “I feel as if my time here will improve my communication skills, even once I return to Japan and go back to speaking Japanese.” Other fellows said that they very much enjoyed a chance to see what their colleagues and the other scientists in their fellowship cohort were working on, particularly those with different specialties or institutional homes, since it could be difficult to find time to mingle during busy days of lab research.

Dr. Tsumaki and Dr. Azuma concurred. “Everything started here for me,” said Dr. Azuma, referring to her own JSPS-NIH Fellowship at the start of her career. “After I left here, I started my own lab.” As for the younger scientists at the event, she encouraged them to consider the “bigger picture” in their projects: “Not just your work now, but what will happen to this project in ten, fifteen, or twenty years.”

Dr. Tsumaki was similarly pleased to have had the opportunity to share his work with a younger generation of fellows. “The financial support and prestige I got from my JSPS-NIH Fellowship was a great honor,” he said. “It gave me the confidence and motivation to keep going, and encouraged me to continue studying. It was so helpful, especially since I had a family at that time, and the fellowship stipend allowed me to support them.” In terms of his advice for the next generation of JSPS-NIH Fellows – or anyone interested in studying science – he said, “The key is to just continue. Believe in yourself, and be modest. Ask your mentors, and respect them. Or at least pretend to,” he added, with a laugh. 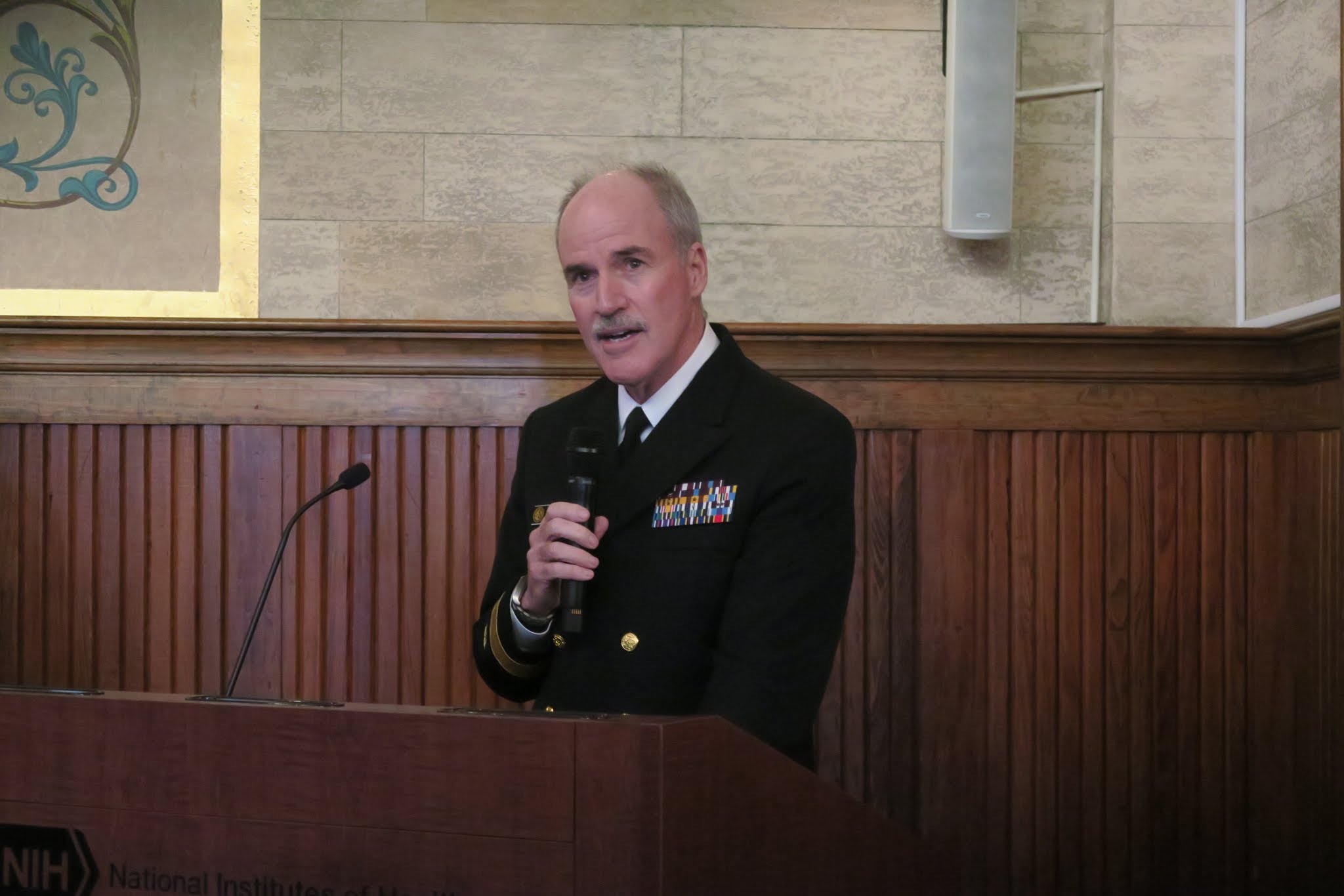 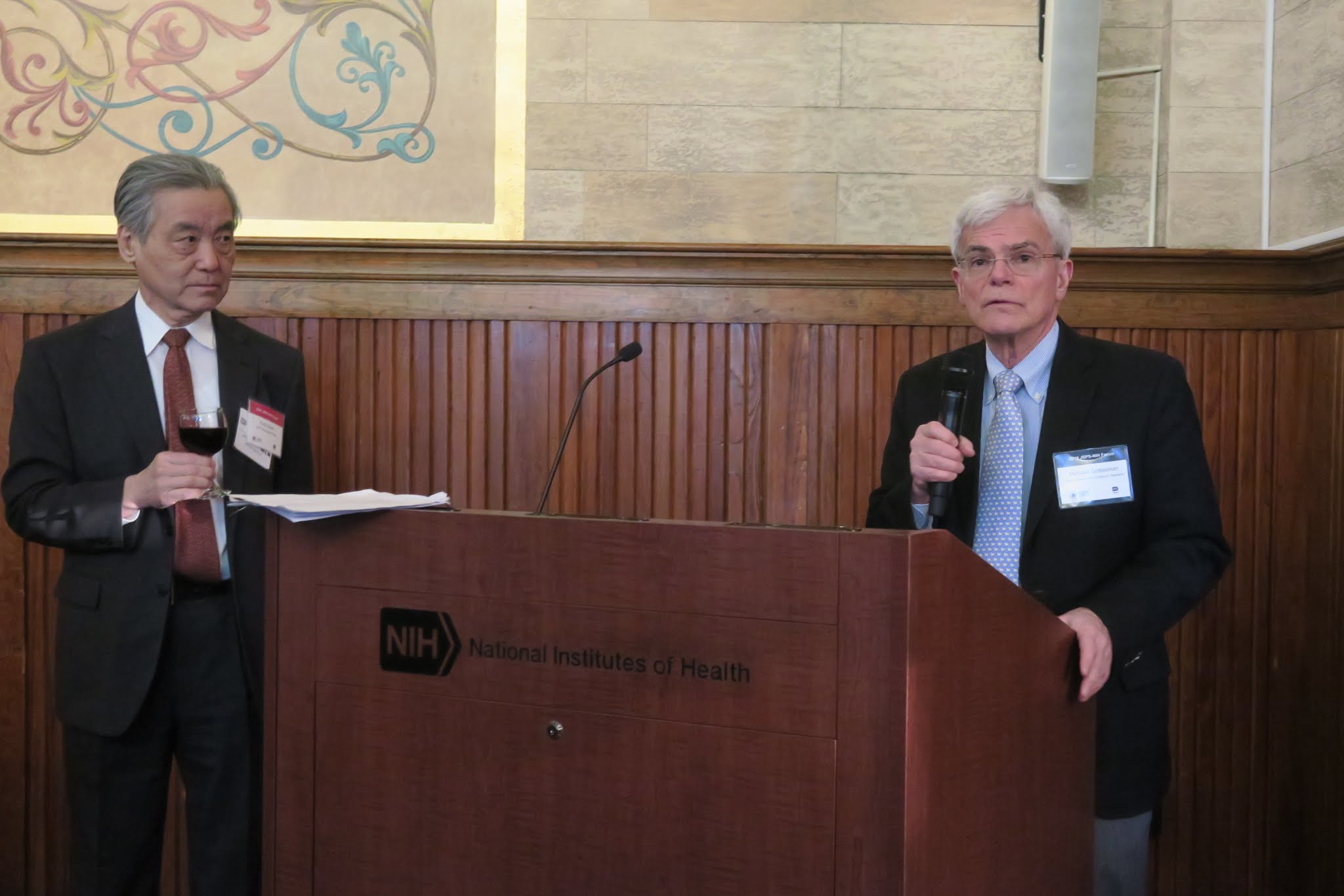 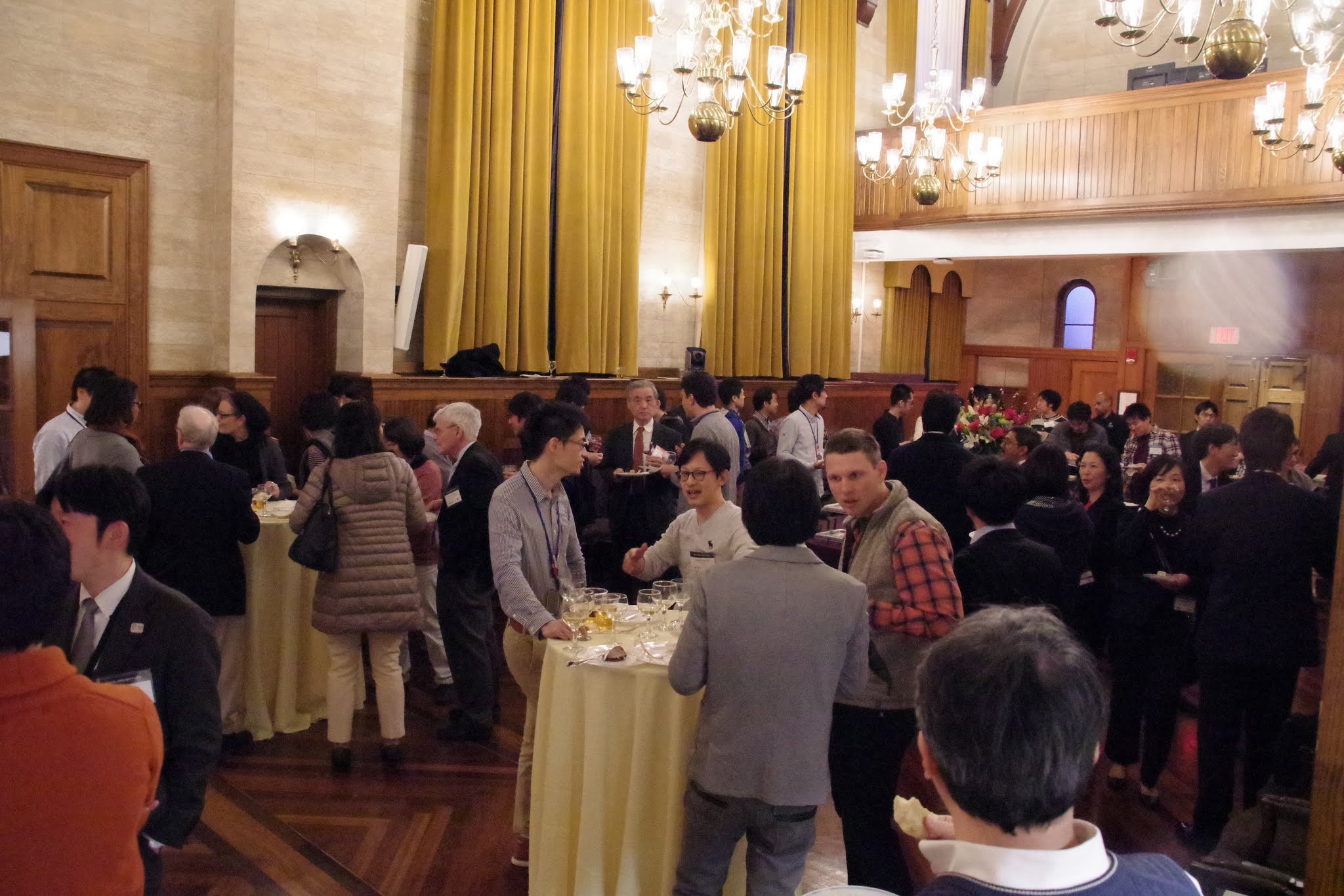 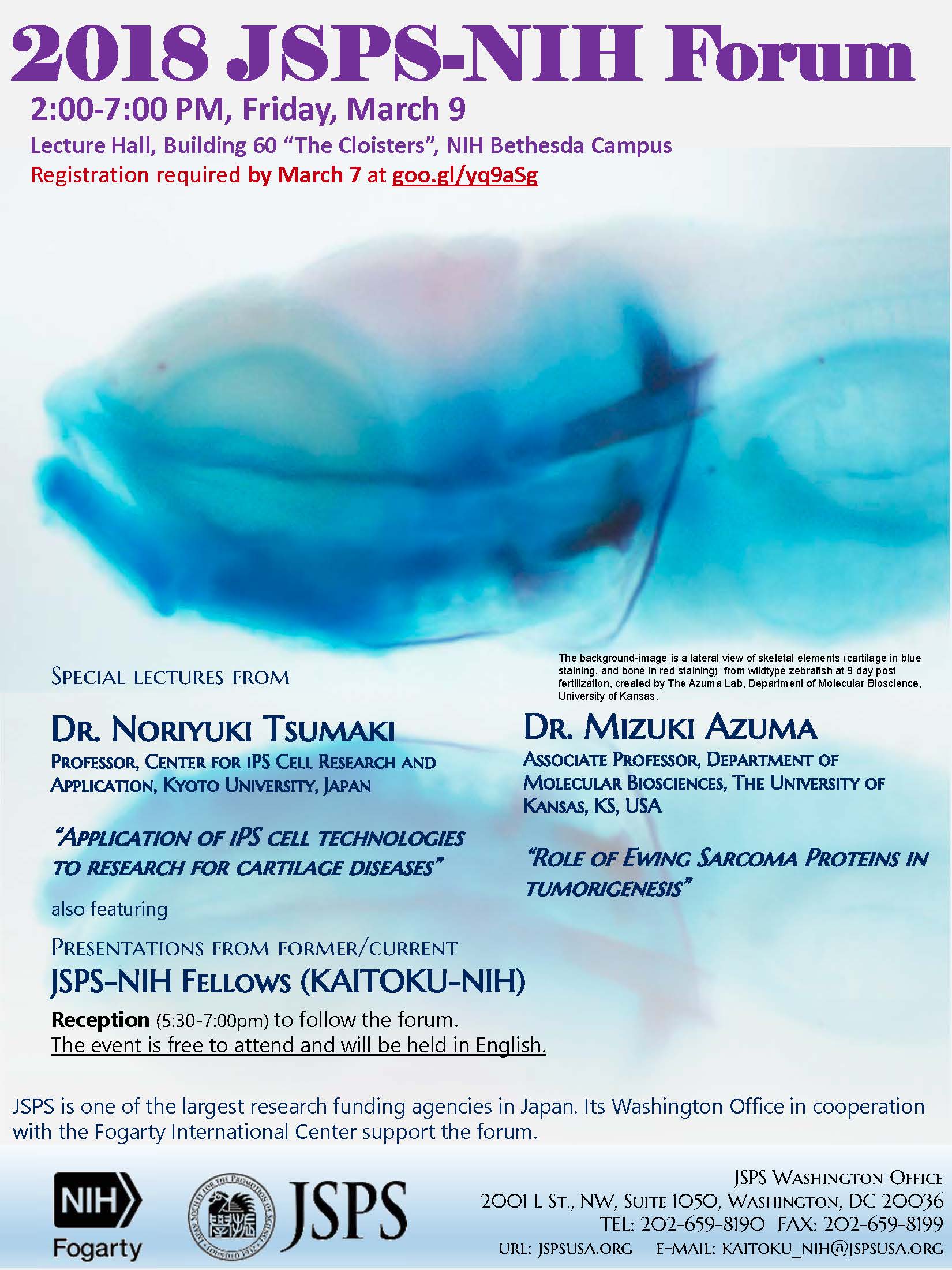 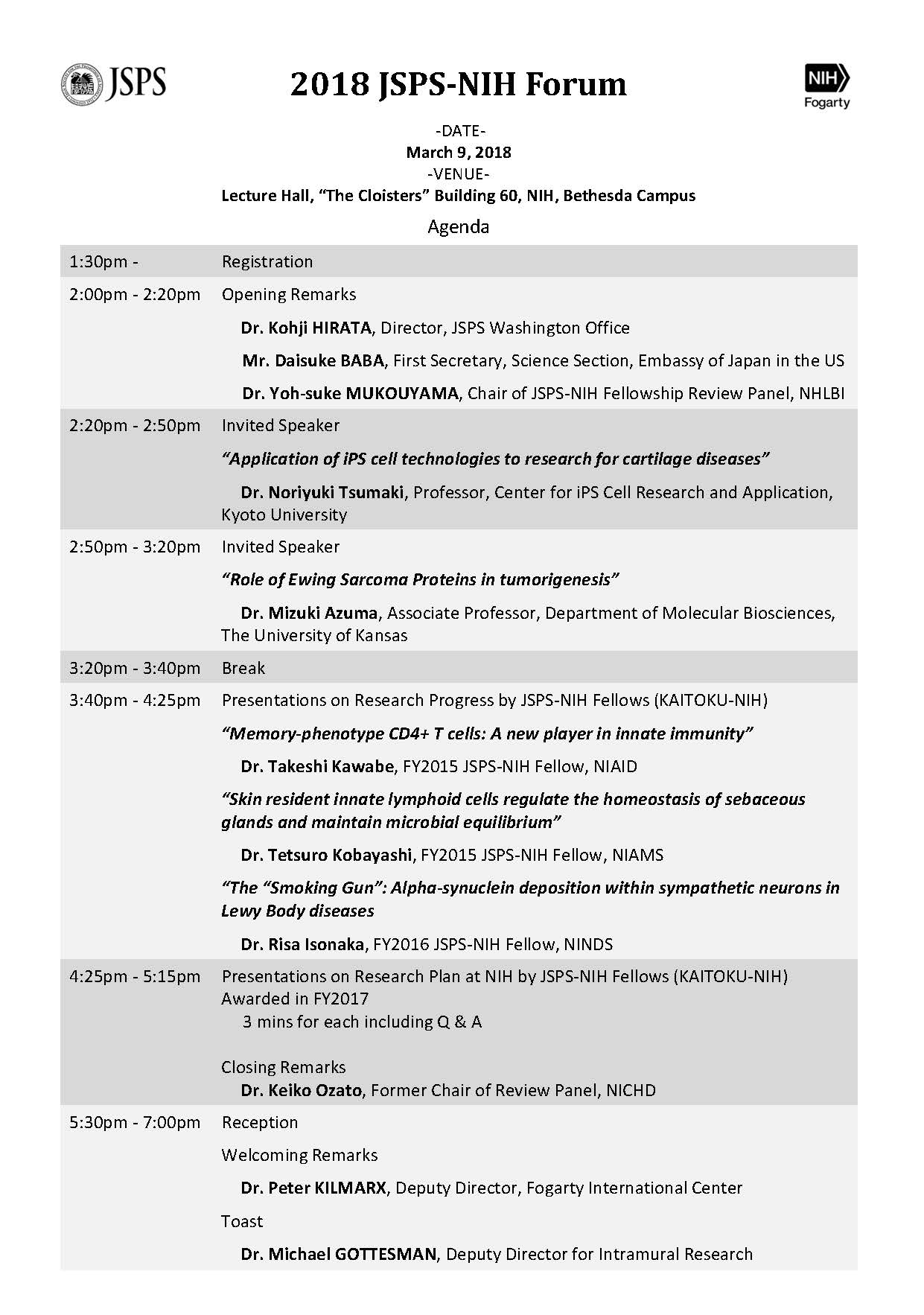